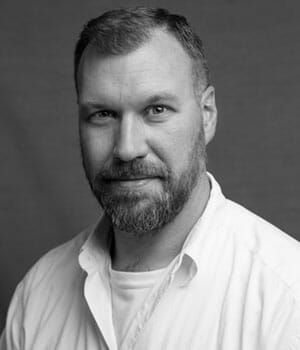 Mike Hammond was bitten by the theater bug early after acting in his first play at the age of 12. He then went on to act in plays through middle and Jr. High school. While attending Watkins Mill High School in Montgomery Village, MD he worked as an actor, singer, and carpenter in school productions of Ten Little Indians, Oklahoma, David and Lisa, Bye, Bye, Birdie, You Can’t Take It With You, and Little Shop of Horrors. Living in Maryland he also worked as a carpenter, props master, and stage crew for The Montgomery Playhouse and The Parallax Theater Company. Mike attended BYU-Idaho on a theater scholarship. At college he worked as a carpenter and performer in several plays, including the lead role in Seven Keys to Bald Pate. His theater career then took him to New York City where he worked with the Adobe Theater Company for 2 years as stage manager and carpenter. In New York Mike also worked as a carpenter, set decorator, and production assistant on commercials, student films, and two major motion pictures, Milk & Money (1996) and I Love You, I Love You Not (1996). After leaving New York for Virginia Mike worked as a resident theater technician at the George Mason University Center for the Arts.